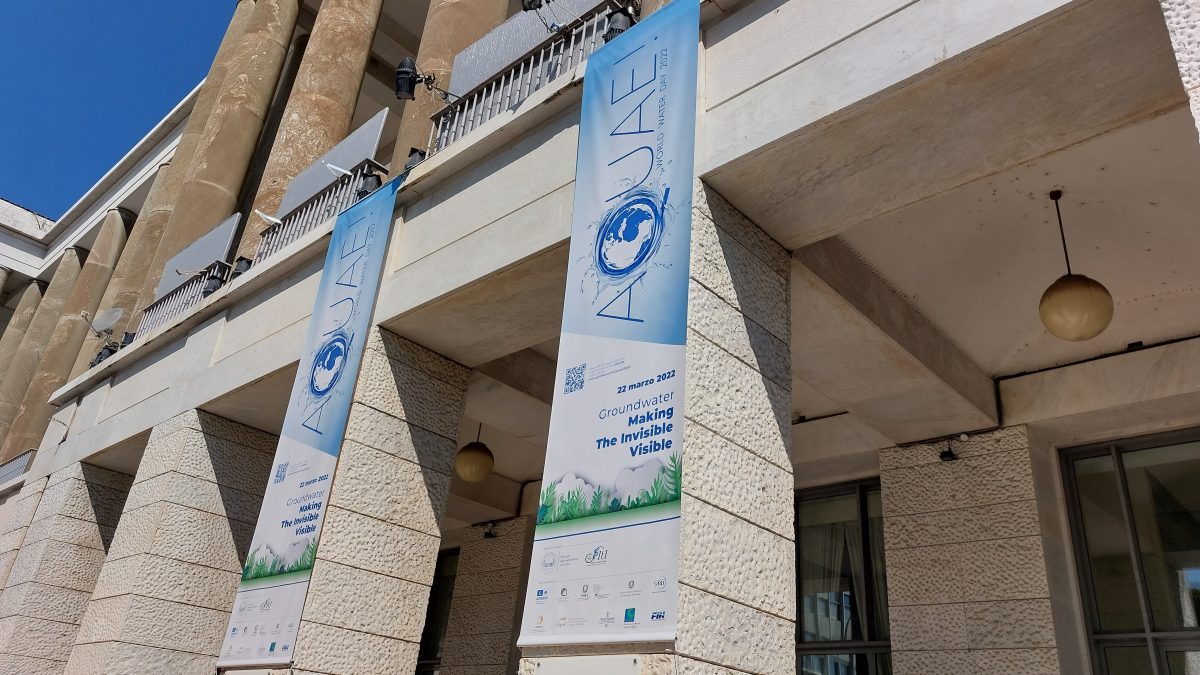 Explora participates at the event “AQUAE! World Water Day 2022” where is going to  presents the European  project “AAA. Accessible Art for All”

The event promoted by the University of Rome Foro Italico and by the Italian Society of Hygiene is held in Rome in Spazio 900 and online through a direct streaming. The Goal of the event is to comment and disseminate the 2022 UN’s report on water which is primarily dedicated to the groundwater. The event is going to be attended by Authorities, Institutions, researchers and secondary school children.

The event is a non-stop” marathon the whole day, conceived according to the interactive talk show formula. This celebration has the patronage of UNESCO Water Program, Istituto Superiore di Sanità, CNR, ISPRA, Autorità di Bacino Distrettuale dell’Appennino Meridionale, INAIL, Agenzia Spaziale Italiana, FNOMCeO, Enpab, Federterme, Fondazione Ricerca Termale FoRST and Federnuoto and it was the initiative, opened by the Rector of the University Attilio Parisi together with Prof. Vincenzo Romano Spica, Scientific Director of the event, and Prof. Italo Francesco Angelillo, President Siti.

The aim of this event  responds to the UNESCO’s annual commitment UNESCO  to raise awareness among the younger generations on the issue of protection and respect for water and the importance of conscious and sustainable use of this resource.  Both primary and secondary schools are going to be involved in this events through the distribution of FairPlay4U notebooks (www.fairplay4u.it) dedicated to the World Water Day 2022.

The conference move forward with a second part dedicated to the theme of water sustainability in its recreational uses, in sport and wellness, with a view from space offered by Dr. Alessandro Coletta, Director of COSMO Med Sky of the Italian Space Agency.  During this conference’s section experts attempt to answers to concerns and question such us: “How to make swimming pools eco-sustainable?”, “What is the current regulatory situation?”, “How to protect underground water sources?”, “How safe is the water that comes to our taps?”, “How we unknowingly pollute through the drugs we ingest”. Among the panelist who held this section it is of relevance to mention the presence of Federico Maestrami, Editor Il Campo; Emanuele Ferretti, Researcher ISS; Claudio Carpineti, Secretary FoRST; Elisabetta Preziosi, Researcher CNR; Maria Siclari, Director of the Department for the Geological Survey of Italy (ISPRA); Luca Lucentini, Director of Water Quality Department ISS; Matteo Vitali, Professor of Hygiene, University of Rome “Sapienza”.

In the afternoon the the conference explore and themes related the close relationship between water and our health, the link with nutrition, fertility and cancer thanks to the interventions of Laura Dugo, Professor of Food Chemistry at the Biomedical Campus of Rome; Laura Cutini, Director of CIG Enpab; Giuseppe Morino, Pediatrician and Dietitian at Bambino Gesù Children’s Hospital in Rome; Eleonora Porcu, Member CSS, Professor Department of Medical and Surgical Sciences, University of Bologna; Giuseppe D’Ermo, Professor Department of Surgery, University of Rome “Sapienza” and LILT Director.

During this event the schools are protagonist in a special session dedicated to the history of groundwater resources and to the work carried out by some Italian schools on the occasion of the World Water Day 2022 of Rome.

In the end the, the last phase of this celebratory day is presented by the journalist and RAI host  Savino Zaba.  Among the guests present at this occurrence it is relevant to mention  there several representatives of the world of research, sports and entertainment  and  Stefania Nisio of ISPRA, Tony Urbani of “La Sapienza”, Donatella Poliandri of Invalsi who are going to present their studies on “disinfection with light” from the University of Rome “Foro Italico”.

In addition there are going several representatives of the art world. Among them it is relevant mention Federico Massa aka Iena Cruz (in connection from New York) an internationally renowned street artist who has always given voice to nature with his works and music, with Andrea Casta and his electronic violin and Philip Abussi, artist and composer of soundtracks on the theme at the center of the conference, producer of Acqua, a song by Alessia Cotta Ramusino, UNICEF Ambassador, who will attend the event on behalf of Women Of Change Italia, an association dedicated to raising awareness of the objectives of the 2030 Agenda.

The event will also be attended by Patrizia Tomasich president of Explora the Children’s Museum of Rome, the athletes of Gli Argonauti Laboratorio di Ricerca sul Movimento with their performance, Gaetano Boldrini one of the founders of the Association La Venta Esplorazioni Geografiche with stories and adventures in the underground of the world.