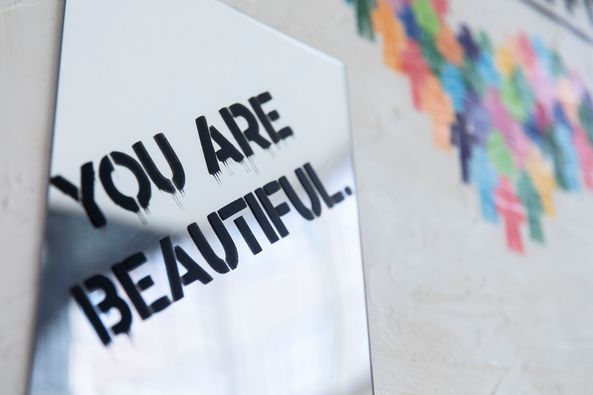 AAAEU project on the BBC

Leicester City Centre was filled with colourful art trails as part of the Liberty UK Festival. Running from 10 July – 15 August, the festival was bringing together international artists and local artists to fill the town with brand new artworks in unusual locations.

Working with BID Leicester, Art on Tap, brought incredible new work to pub courtyards around the city centre. The Loyal Free App featured a trail of artwork that you can find in some of your favourite local pubs and bars. Art on Tap aimed to bring the gallery to you so that you could enjoy new large-scale murals created by incredible artists over some choice refreshments as you take some time in the city centre. You will be able to enjoy Art on Tap by Laura Parker at The Tree, Katie Fishlock at The Parcel Yard, Zoe Power at the Rutland & Derby, The Rebel Bear at The Queen of Bradgate, and Oliwia Bober at Cafe Bruxelles.

As part of a European-wide project called Accessible Art for All, the festival also installed some quirky installations in toilets of local shopping and cultural venues in the city centre.
Beth Piggott, Producer for the festival explained that, “We’re working with partners in Italy, Germany, Sweden and Bulgaria to place a series of high-impact installations into locations that we all use on a daily basis. Leicester is the first of these projects to take place but soon, all across Europe, people will experience artwork that questions important social issues in intimate locations. We worked with some contemporary international artists to create this work and we’re excited to bring world-class contemporary visual art installations to a toilet near you soon!”

Installations in toilets in Leicester includes work by Polish illustrator Oliwia Bober, who draws influences in her work from Polish folklore, reflecting on her position as an immigrant in post-Brexit Britain which will be available to see in Highcross Shopping Centre; and Richard DeDomenici and his ‘Cubicle your Fears’ installation, revealing fears, hopes and dreams with strangers in the LCB Depot.
Richard’s installation is inspired by his highly successful work, ‘Shed your Fears’ which appeared at
Tate Gallery, YouTube Space and the British Museum.

Finally, created by Liberty Changemakers, a team of young people who enjoyed a series of free artist-led workshops where they learned how they can tackle problems they care about, Beauty in the Street is an outdoor exhibition installed onto the exteriors of buildings throughout the City Centre.
Working with a team of highly specialised artists and campaigners the Liberty Changemakers have developed their own powerful social action campaigns and created poster art that shares messages of equality, diversity and compassion.

The Liberty UK Festival will return to Leicester in March 2022 after popping up in Halton in Liverpool in September and Corby in February next year.
Alongside the other exciting events that BID Leicester have planned for the summer it really does feel like there’s plenty of reasons to get back into and start enjoying summer in the city again.